Bring laughs and engagement to your virtual event!

"LET's GO TO THE PHONES"
a hilarious interactive call-in show

Want to start your virtual event with some belly laughs?

Inject some energy, engagement and fun into your long day of virtual meetings and online chats?

Coming to an event near you, the stars of CBC Radio’s award-winning comedy program THE IRRELEVANT SHOW present their improvised call-in show LET’S GO TO THE PHONES!

The format is simple and highly engaging. It’s basically a radio call-in show, with audience members sending in questions by chat or text.  PETER BROWN hosts the show. Your audience members choose a topic and the hilarious DONOVAN WORKUN becomes an instant expert in that subject. Then we take “calls” from the audience and answer any and all questions you can think of. The audience is in the driver’s seat and our brilliant comics roll with whatever you throw at them. We’ve had a great time doing episodes about socks, vacuums and belly button lint!

The result is smart, silly and surprising. The live theatrical version earned 5 stars from the Edmonton Journal who called it “a festival of belly laughs.”  People who attended a recent virtual presentation said it was “hilarious”, “gut-busting” and “OMG exactly what I needed”.

The perfect way to engage and energize your audience with some much-needed laughter. 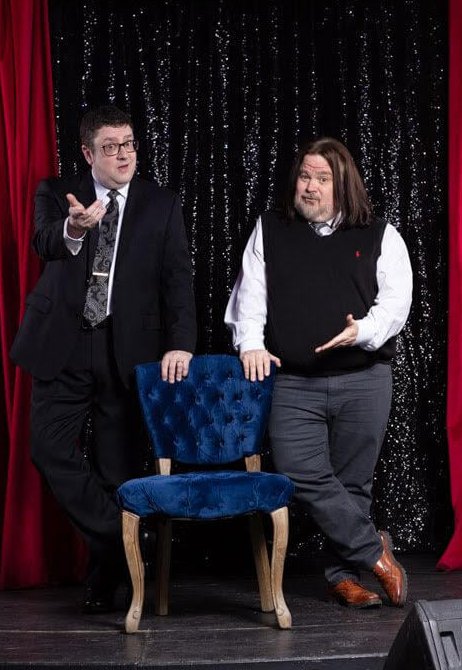 CUSTOM VIDEOS TO DELIVER YOUR MESSAGE

If you’d like to promote your event or add an introduction or laughter break, we can write, shoot and produce CUSTOM VIDEOS that will deliver your key messages with a splash of entertainment and humour.

Here are a couple videos in a series we did for the United Way’s Kickoff Conference:

Hire Us For Your Event